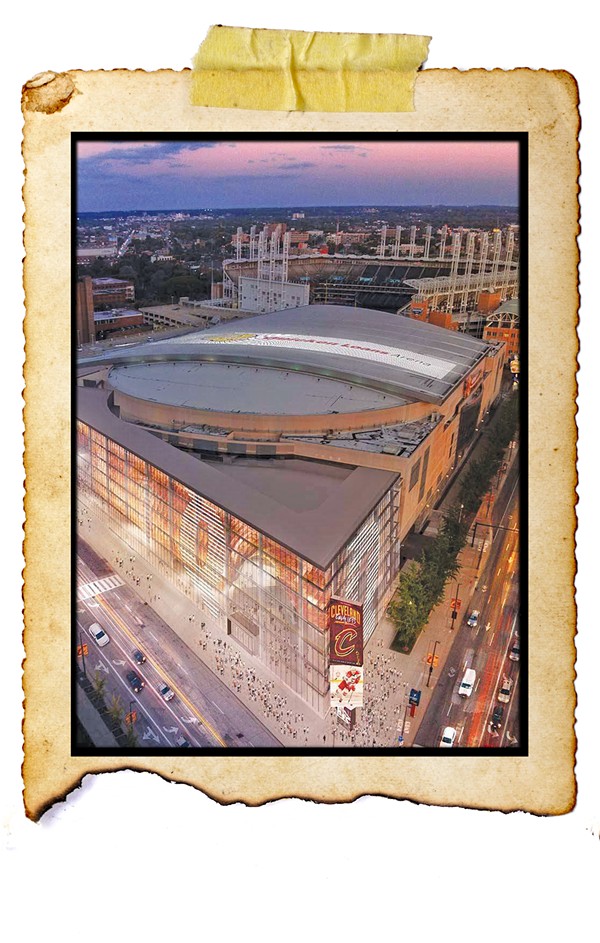 Cuyahoga County Council may borrow roughly $40 million to pay the Cleveland Cavaliers for capital improvements now underway at [Rocket Mortgage Fieldhouse] and to reimburse the team for projects already completed. Under the terms of the Cavs lease, the public is on the hook for “major capital repairs,” that cost more than $500,000, and the Cavs are careful to ensure that those terms are honored.

The Cavs have been spending willy-nilly at the arena, making significant repairs and upgrades outside the parameters of the massive renovation, (the so-called “Q Transformation”), for which the public will be contributing something like $160 million in capital and interest payments until 2034. The glass facade is nearly complete on Huron Avenue downtown.

The public pays for major capital repairs with revenue from the Sin Tax, the countywide tax on cigarettes and alcohol which was renewed in 2014 and brings in between $13 million and $15 million each year, ($13.9 million in 2018). That revenue is split evenly among Cleveland’s three professional sports teams, but is nowhere near enough to pay for the extravagant capital projects — in addition to regular required maintenance — that the teams continue to itemize.

This new potential $40 million upfront payment to the Cavs, according to team CEO Len Komoroski, should cover the arena’s needs for “the foreseeable near future,” a meaningless timeframe. It’s likely that the Cavs want to make sure everything’s ship shape before the All-Star Game in 2022.

According to cleveland.com, the County may also refinance $60 million it borrowed in 2015 (against future Sin Tax revenue) and may attempt to back the remaining balance with general fund dollars to get a better rate.

On their list of proposed improvements, the Cavs have included new heating and air conditions systems, fire alarms and lighting. They also claim to want to improve their bathrooms in accordance with the Americans with Disabilities Act and would like a new “ice floor” and chiller plant for Monsters hockey games.

One can and should argue about how these projects are selected and funded. The language of the lease — where a major capital repair equals “any single Capital Repair that renders the Arena untenable in whole or in part by Lessee as determined by Lessee, in its reasonable discretion, or will cost in excess of $500,000 to perform” — basically means that the Cavs get to pick and choose what they’d like to upgrade.

But does a slightly-less-than-state-of-the-art scoreboard, for example, render the arena untenable? In whole or in part?

The lease language, in any case, should not mean that the Cavs can upgrade their facilities however they please and then charge the public for anything over $500,000 after the fact. The county should have a much more active hand, early on, in delineating what exactly they’ll cover and in disputing the sorts of items that are alleged to render the arena untenable. Given the lack of funds, the county should insist on interpreting that language to mean that they are responsible for repairs, but not improvements.

HVAC overhaul? Probably. New roof? Only if the public agrees that it needs replacing. Scoreboard? Absolutely not. Retractable seats? Absolutely not. Suite improvements and the Club Lounge at Progressive Field? Hell no.

Come to think of it, can the new ice rink and the chiller even be included? The Monsters play at Quicken Loans arena but are not one of Cleveland’s three professional sports teams and therefore aren’t included in the Sin Tax considerations.

But the greater embarrassment in all this is the Q Deal.

As annoying and suspect as some of these improvements are and have been, the Cavs lease does indeed stipulate that the public will cover improvements over $500,000. It’s a bad lease and it ought to be restructured, but unfortunately it’s on the books.

The Q Deal was not. The public was under zero obligation to pay a dime.

Moreover, our leaders knew that the Sin Tax pot was running dry in 2017. The Executive Director of the Gateway Economic Development Corporation — technically the Cavs’ and the Indians’ “landlord” — announced as much days before City Council rejected petitions which sought a referendum on the city’s projected $97 million contribution to the Q Deal. But our leaders didn’t care. They were overjoyed to trumpet the Cavs talking points, promoting the narrative that the deal was an “investment in neighborhoods.”

County Executive Armond Budish, who bragged about all the rigorous negotiating he did with Dan Gilbert, got jacksquat for the public. The one benefit of the deal, per Budish, was that we got to “lock our championship Cavaliers into Cleveland for an additional seven years, from 2027 to 2034.”

Given that the lease language is so favorable to the team, why wouldn’t they stay?

The most terrifying line in clevleand.com’s write-up of Wednesday’s county council meeting didn’t concern the Cavs. Reporter Courtney Astolfi said that the Indians are not seeking reimbursement for the costs of their recent upgrades that exceeded their Sin Tax allotment. Why not?  “Because they are working on long-term planning ahead of their lease expiring in 2023.”

Halle Berry is the Most Popular Person From Cleveland, New Interactive Map Shows

William D. Leahy Was the Hidden Power Behind D-Day | History

Is the US heading in the right or wrong direction: The nation generally

Australian Open 2020: What to Expect