Home » Blog » Should Sherwin-Williams Be Celebrated for Keeping Jobs in Cleveland When it’s Kicking Janitors to the Curb? 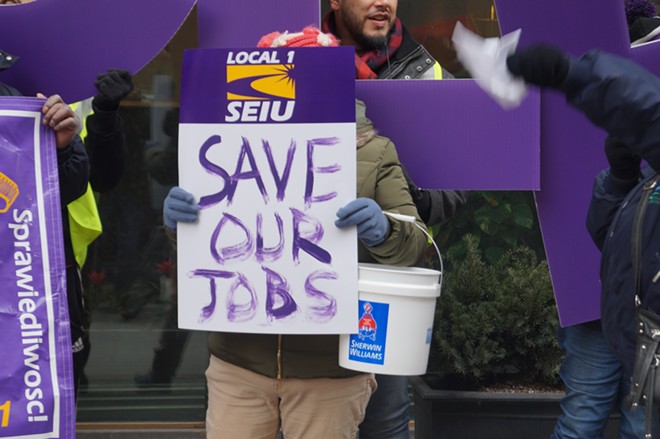 The Service Employees International Union Local 1 and their labor allies are calling on Sherwin-Williams to preserve the jobs of more than 30 union janitors who clean the paint company’s downtown headquarters.

Last month, the paint and coatings corporate giant informed the contractor who employs the janitors, ABM, that they’d be seeking a new contractor. The current janitors, several of whom have been cleaning the facility for 15 years or more, will be out of a job at the end of the month.

Sherwin has said that the janitors weren’t meeting performance and quality expectations and that repeated attempts had been made to report the issues to ABM, but that the issues had not been resolved.

SEIU maintains that it is absolutely the company’s prerogative to negotiate with the contractor, or to select a new one, but that these conversations should have happened on an individual basis.

SEIU says that its unionized janitors make between $12 and $15 per hour at Sherwin, whereas non-union workers typically make between $10 and $12. Moreover, SEIU members have explicitly juxtaposed the decision to dismiss its janitorial staff en masse with its expected campaign for public subsidies in the design and construction of a new corporate headquarters downtown. (Both Cuyahoga County and the City of Cleveland have lately retained law firms to help them draft incentive packages for Sherwin.)

“I don’t feel they deserve our money, the taxes we pay,” said Tiffany Gallego, one of the Sherwin-Williams janitors who will lose her job, in comments to the Plain Dealer. “You’re trying to kick us out of our jobs and use our tax dollars for your new building! It’s not fair.”

At a demonstration Thursday outside Sherwin-Williams’ corporate offices on West Prospect, speakers stressed that the issue was one of income inequality.

“Just because we’re cleaning trash doesn’t mean they can dismiss us like we are trash,” said Sandra Ellington, an SEIU janitor at Cleveland Hopkins International airport, who emceed the event. “This is a multi-billion dollar corporation and they’re dismissing janitors? Oh my god. They ought to be ashamed of themselves.”

Williams said that janitors, just like everybody else, deserve a livable wage — “not a minimum wage, a livable wage,” — and that the janitors at Sherwin-Williams worked just as hard as the executives, “even if [they’re] not wearing a suit and tie.”

Yanela Sims, in a statement provided to Scene, said that unions have historically been the best way for women and people of color to make economic gains. The visual aids at Thursday’s demonstration included a large purple “1-C-L-E” to symbolize unity in Cleveland for working people of all colors and backgrounds.

In a press advisory, SEIU said that “it’s time Cleveland worked for all working people—whether white, Black or brown—and not just a certain wealthy few.”

Trump Pushed Mexico to Block Its Border. A Migrant Caravan Tests It.

Your party identification for elections and politics?