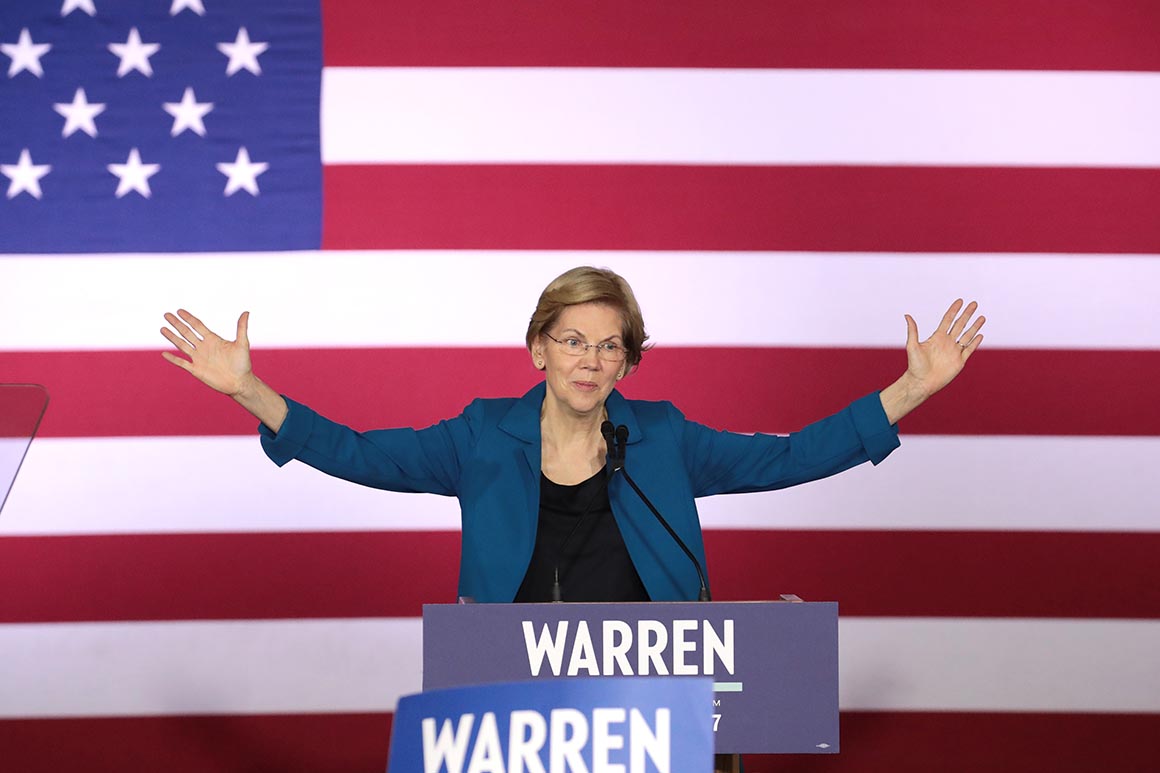 In interviews Wednesday night on CNN and MSNBC, she didn’t lean into those contrasts — instead sticking to her corruption-focused, policy-heavy message and a call to unite the two wings of the party. Some close Warren allies are agitating for more tough talk, the kind that made her a progressive star in the first place. They want to see the end of what one called “fluffy Warren.” The person added: “The campaign of big structural change needs some big structural change.”

Other allies contend that sexism — among voters and in media coverage — has made it much trickier to go on the attack.

“Every time she’s tried to go out there and be more aggressive and really push the envelope in terms of policy and other candidates, there’s been a sharp rebuke from the press and the public against her,” said Jonathan Westin, executive director of New York Communities for Change. Westin was involved in the effort to draft Warren into the presidential contest in 2016.

“There very obviously is a sexism factor on how she’s able to go on the attack,” he said.

A campaign overhaul is also unlikely, other allies say.

“Look at how little Biden’s campaign shake-up helped him,” Democratic strategist Adam Jentleson, who is close to the Warren team, said in reference to Biden elevating aide Anita Dunn after his fourth-place finish in the Iowa caucuses. “Shake-ups often just signal panic and don’t help much. If you believe in the plan, you stick to it.” And, Jentleson added, “She believes in the strategy.”

That strategy rests on the expectation of a long primary race that will winnow the field and allow Warren to collect delegates, particularly in the contests that begin March 3 with Super Tuesday. Another poor performance in Nevada next Saturday, however, could leave her too weak and financially depleted to seriously compete in those states.

Your guide to the permanent campaign — weekday mornings, in your inbox.

The campaign recognizes the importance of Nevada. It has canceled more than $700,000 in television ads in South Carolina in order to stay on the airwaves in Nevada and begin airing ads in Maine, a Super Tuesday state. Warren has been preparing for the March contests for months, hiring hundreds of organizers across more than two dozen later-voting states before any of her rivals.

There are headwinds in Nevada, however. Warren has spent less time there than in the other early states. The campaign also quietly dispatched Democratic operative Kevin Brown to the state last fall to try and shore up the operation, but two former officials told POLITICO that the move also created confusion over who was in charge.

History is working against Warren. No Democratic or Republican in the modern primary era has suffered similar defeats in the first two contests and gone on to win the nomination.

Asked Wednesday on CNN whether she had a sense of why her message didn’t resonate in New Hampshire, Warren replied, “You know, I don’t.” With only two states having voted, she argued, there is a long race ahead.

The Warren team is hoping that Sanders and Buttigieg receiving less than 30 percent of the vote in both contests is a sign that voters are divided and still largely undecided. Warren herself has called the race “fluid” and “frothy.”

“Here’s my investment advice to you: Nobody should be investing much right now in the prediction-making industry,” she told her staff during the Tuesday night call. “There’s gonna come a time when it is clear what’s going to happen in this contest, but that time is not now.”

Warren added: “We are nowhere near that moment. We are not close. We’re not even within shouting distance. Even so, I recognize that doesn’t make this easy.”

What Andrew Luck has been doing after retirement from NFL

Should drug prices be posted so consumers know what they are paying?