Washington, D.C., was established as the “permanent seat of the Federal Government” by the passage of the Residence Act in 1790. This act allowed President George Washington to select the site for the new city anywhere along the banks of the Potomac River between its junction with the Shenandoah River, near present day Harpers Ferry, West Virginia, and its junction with the Eastern Branch or Anacostia River, just below the current location of Washington, DC.

The area demarcated for the new city was a blank slate and President Washington selected Major Pierre Charles L’Enfant (1754-1825) to create a design for it. The map below, published in 1794, reflects L’Enfant’s vision for the new city with a few improvements attributed to Andrew Ellicott (1754-1820).

Ellicott, Andrew. Plan of the city of Washington in the territory of Columbia: ceded by the states of Virginia and Maryland to the United States of America, and by them established as the seat of their government after the year MDCCC. [Perth, Scotland?: s.n., ?, 1792], Geography and Map Division. Published in 1792, the map shows canals leading from the Potomac River, down the former location of Tiber Creek (see below), to the base of the Capitol, and then south to the Navy Yard.

The detail below shows the Potomac River, the mouth of Tiber Creek, and the United States Mall as laid out by L’Enfant and Ellicott. Running along the  Mall, as we know it today, was a creek that led westward from roughly the current site of Union Station to the Tidal Basin and, ultimately, to the Potomac River. What many Washingtonians may not realize is that both L’Enfant’s original design, and Ellicott’s improvement incorporated canals to facilitate the shipment of goods and construction materials to build the new city. 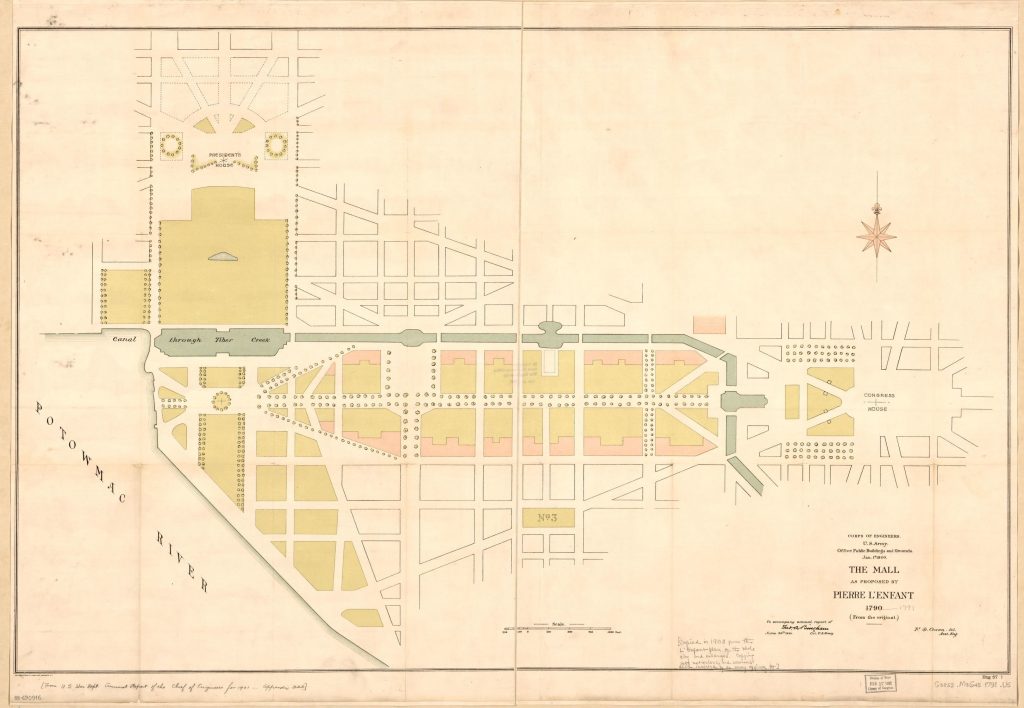 In addition to the canal running past the White House, there were grand plans for a university on the west end of the Mall and a turning basin for the canal at the base of Capitol Hill. The proposed University resembles the original campus of the University of Virginia! 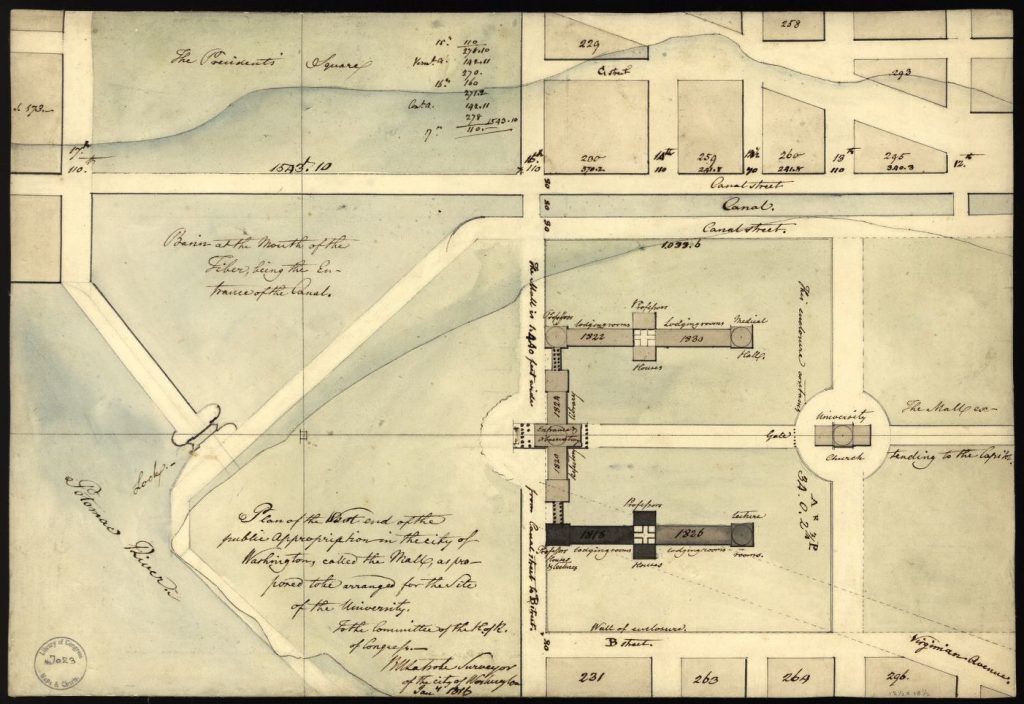 District Of Columbia. Office Of The Surveyor, and Benjamin Henry Latrobe. Plan of the west end of the public appropriation in the city of Washington, called the Mall: as proposed to be arranged for the site of the university. 1816. Geography and Map Division. 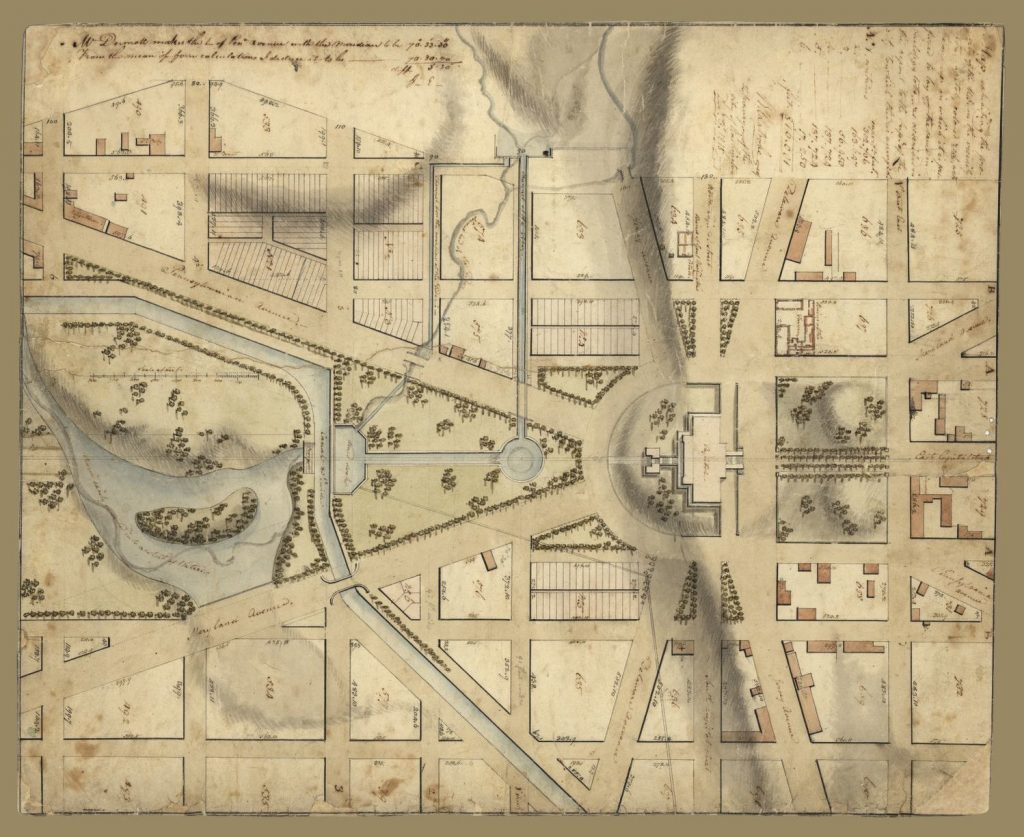 District Of Columbia. Office Of The Surveyor, and Benjamin Henry Latrobe. Map exhibiting the property of the U.S. in the vicinity of the Capitol: colored red, with the manner in which it is proposed to lay off the same in building lots, as described in the report to the Sup’t of the city to which this is annexed. 1815. Geography and Map Division. In addition to the Washington Canal, the topography of Capitol Hill, also known as Jenkins Hill, can be seen running from north to south through the center of the map.

So why the canal?  It was simply a time saving measure.  The sandstone blocks that were used in constructing the White House, the United States Capitol, and other government buildings in the new city, were quarried in Aquia, Virginia, located approximately 45 miles south of Washington, D.C.  The stone was transported up the Potomac River and, via the canal, to the future sites of government buildings along the Mall.

The canal eventually outlived its usefulness and, as the city grew, its popularity as a means of transporting cargo waned. By the late 1870’s the canal was virtually an open sewer and the decision was made to fill it in.

With ‘Upload,’ Greg Daniels Takes a Leap Into the Great Unknown