The following is a guest post by Brooke Biastock, who completed a month-long internship at the Library of Congress Poetry and Literature Center over the Hollins University January 2020 Term.

This post is part of our “Literary Treasures” series, which highlights audio and video recordings drawn from the Library’s extensive online collections, including the Archive of Recorded Poetry and Literature. By showcasing the works and thoughts of some of the greatest poets and writers from the past 75 years, the series advances the Library’s mission to “further the progress of knowledge and creativity for the benefit of the American people.” The recording discussed in this post was just added to the Archive of Recorded Poetry and Literature online collection in April 2020.

Throughout my month-long internship at the Poetry and Literature Center, I had a myriad of tasks and opportunities, but one thing that I did time and time again was listen to this 1982 recording by Audre Lorde and Marge Piercy in the Library’s Coolidge Auditorium. Marge Piercy was one of the first poets who really inspired me as writer and activist. I read her poems in high school and recited one of them in my first creative writing class at Hollins University. After spending hours listening to remarkable poetry readings in the Archive of Recorded Poetry and Literature, I kept being drawn back to this one. So when I was asked to write a blog post about a recording, I knew I needed to talk about the reading featuring both Audre Lorde and Marge Piercy.

In writing biographies of authors and listening to archival recordings for my internship, I found it fascinating that both Audre Lorde and Marge Piercy had tumultuous relationships with their mothers, but they also each cite their mothers as being a core part of their writing and poetry. Lorde’s mother taught her how to write, and Lorde discusses her relationship with her mother in her book Zami: A New Spelling of My Name (1982), where she writes, “I am a reflection of my mother’s secret poetry as well as of her hidden angers.” Similarly in a poem Marge Piercy reads in this recording, she says, “Mother, I am your poet” (“Crescent moon like a canoe”). The biography on Piercy’s website explains that she “credits her mother with making her a poet” as her mother was “an emotional, imaginative woman full of odd lore and superstition.” She states that “she and her mother were not really in sustained harmony until very late in her mother’s life.” These poets’ ideas about motherhood and daughterhood seep into their poems in this reading. In this recording, Lorde and Piercy each explore what one inherits from a mother, specifically examining what it means for a child to inherit a world full of injustices.

Lorde’s poems are heightened and contextualized by the unique mother grief that a black mother endures, bearing a long history of racial violence and death of children of the past, present, and future. Lorde called herself a “black, feminist, lesbian, mother, poet, warrior,” identities that all inform how motherhood and childhood are discussed in her poems. Lorde showcases the complex difficulties of black motherhood in “Power” (at 19:45), where she sets up the characters of the speaker, a black woman juror, and the murderer policeman:

The difference between poetry and rhetoric
is being ready to kill
yourself
instead of your children.

She contrasts these opening lines with the following haunting lines about a black woman juror who could not find that difference:

and one Black Woman who said
“They convinced me” meaning
they had dragged her 4’10” black Woman’s frame
over the hot coals
of four centuries of white male approval
until she let go
the first real power she ever had
and lined her own womb with cement
to make a graveyard for our children.

“Power” weaves all these threads and more to showcase the complexities of inherited grief and strife, as she does in several other poems in this reading. She begins her poem “School Note” (at 14:09) by explaining that the poem is a response to a note from the teacher stating that her children were in a “primitive state of social development.” Lorde responds with this poem dense with imagery and metaphor of children inheriting and existing within a continuation of a fraught past. In the second stanza, Lorde states:

My children play with skulls
at school
they have already learned
to dream of dying
their playgrounds were graveyards
where nightmares of no
stand watch over rented earth
filled with the bones of tomorrow.

Lorde explains that the play and playgrounds of children are not removed or exempt from the history and present landscape that they exist within. Lorde finishes the poem with tragic lines about the position this places both black mothers and children in:

there is no place
that cannot be
home
nor is.

Following Lorde’s beautiful reading, Marge Piercy reads several poems leading up to a personal piece addressed to her mother. In “Crescent moon like a canoe” (at 57:22), Piercy speaks about all the ways that the world grated upon her mother, diminishing her worth, writing:

You could not love yourself or me.

She continues in this way, contrasting the gifts her mother gave her with the inherited anger that came along with them. The tension builds until the root of the anger is revealed in the heart-wrenching lines: 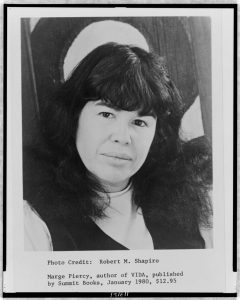 You did not want the daughter you got.
You wanted a girl to flirt as you did
and marry as you had and chew the same
sour coughed up cud, yet you wanted too
to birth a witch, a revenger, a sword

of hearts who would do all the things
you feared. Don’t do it, they’ll kill
you, you’re bad, you said, slapping me down
hard but always you whispered, I could have!
Only rebellion flashes like lightning.

Piercy recounts running from this relationship, lamenting the inherited friction keeping her and her mother apart, explaining “your life and mine pass/ in different centuries, under altered suns.” This tension, the underpinning of the entire piece, leads to an imagining where the history of pain between mother and daughter is washed away:

In the land where the moon hides, mothers
and daughters hold each other tenderly.
There is no male law at five o’ clock.
Our sameness and our difference do not clash
metal on metal but we celebrate and learn.

This becomes a tender and resonant wish for a world without the pain and history which haunt both Audre Lorde and Marge Piercy’s poems.

Michigan dam breached, another at risk amid Midwest floods