Home » Blog » A Fascist Dystopia with Style on the Adriatic

These ten maps on a single sheet, published in 1918 by the Italian-American News Bureau, call attention to the significance of the port of Fiume to many Italians, besides the hero of our story.  Geography and Map Division.  Italy – Fiume – 1918 – Italian American New Bureau

The Croatian seaport of Rijeka commands a stunning view of Kvarner Bay (Golfo del Carnaro), nestled in an arm of the northern Adriatic between the Istrian Peninsula and the Croatian littoral.  Over the centuries its outstanding deep water port has attracted Celts, Greeks, Romans, Franks, Goths, Venetians, Byzantines, Hapsburgs, and Italians, most of whom have contested its possession.  Aside from Croatian and Italian, one can still hear its inhabitants speak the old Venetian dialect of Fiuman, an eponymous attestation to one of the city’s more recent, if not strangest, political transitions, when it was overtaken in the Impresa di Fiume (Endeavor of Fiume) and ruled by the notorious Italian fascist known as Il Duce.

No, not that Il Duce. 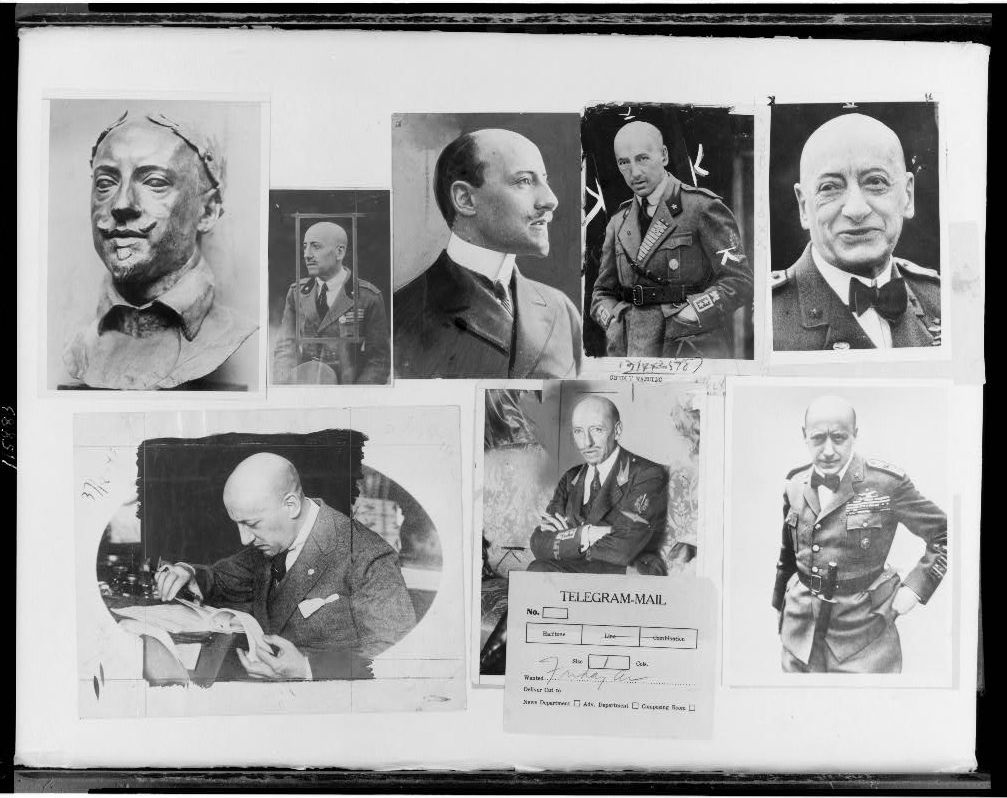 This composite image of eight portraits depicts a few of the many facets of Gabriele d’Annunzio.  [Gabriele D’Annunzio, eight portraits].  Prints and Photographs Division.

Improvising on Voltaire, if Gabriele d’Annunzio (1863-1938) had never existed then the world would have had to invent him.  Novelist, poet, playwright, composer, journalist, soldier, national war hero, politician, honorary prince, libertine, proto-fascist, developer of a museum commemorating his own life and work, and all-around aesthete, Gabriel d’Annunzio was the sort of man to whom his own children had to refer as “maestro.”  A pioneer of celebrity culture, as well, he shrewdly embellished his ardent nationalism with showmanship, attracting a cult-like following in Western Europe.

Critically-acclaimed poetry and prose flowed from d’Annunzio’s pen in the decades leading to Italy’s entry into the Great War, during which he cemented his military reputation by commanding a daring 700-mile round-trip air raid, known as Il Volo su Vienna, to drop thousands of propaganda leaflets, authored by d’Annunzio himself, urging Austrians to surrender. 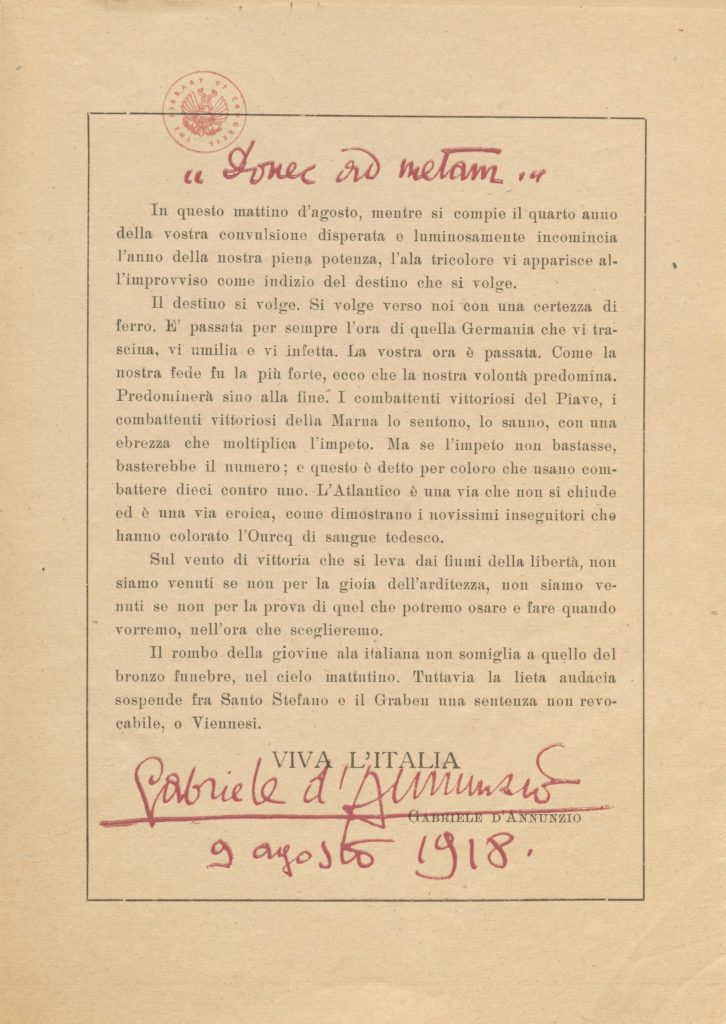 This is an alternate version d’Annunzio’s leaflet, albeit with his autograph, dropped over Vienna on August 9, 1918.  It and a facsimile holograph draft are part of the Gabriele D’Annunzio Papers in the Manuscript Division.

But, the War and its outcome hardened his irredentist and nationalist views, which were further inflamed by the decision of the Paris Peace Conference 1919 to hand the ethnically Italian city of Fiume over to the newly-formed Kingdom of Yugoslavia.  Behind the wheel of a red Fiat, he led an army of several hundred nationalists from just across the Italian border to Fiume on September 12, 1919, in the Impresa di Fiume, forcing the inter-Allied occupiers to withdraw and annexing it to Italy.  D’Annunzio had taken the first radical nationalist initiative on behalf of Italian Fascism. 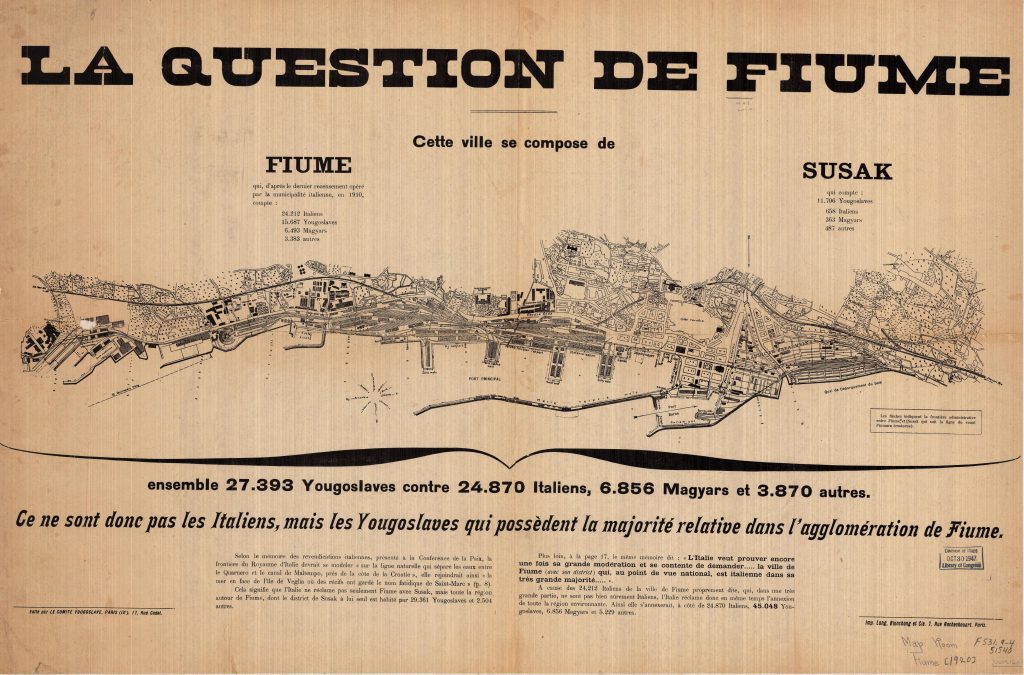 This 1920 French map of Fiume indicates a preponderance of Italians within the city proper, but points to an overall Yugoslav majority in adjacent areas.  Geography and Map Division.  Italy – Fiume – Ethnology – 1920 – le Comite Yougoslave

When Fiume’s ruling council accepted an Italian proposal to recognize the city’s desire for annexation, d’Annunzio flatly rejected it and invited Fiume’s inhabitants to a plebiscite on December 18, which approved the Italian offer.  He then nullified the plebiscite, and set about governing the city according to his own anarchist and proto-fascist ideals.  The ensuing fifteen months of rule were a surreal carnival of ceremony, decoration, parades, fireworks, drugs, alcohol, sex, and general debauchery.

During breaks in the festivities, he managed to co-author with his syndicalist partners a constitution known as the Carta del Carnaro, which established a corporatist state consisting of executive, legislative, judiciary, communal, and corporate branches, the latter combining nine sectors of the economy plus a tenth spiritual sector “reserved for the mysterious forces of progress and adventure.”  Music – Alas! But not geography! –was chartered as a “social and religious institution.” 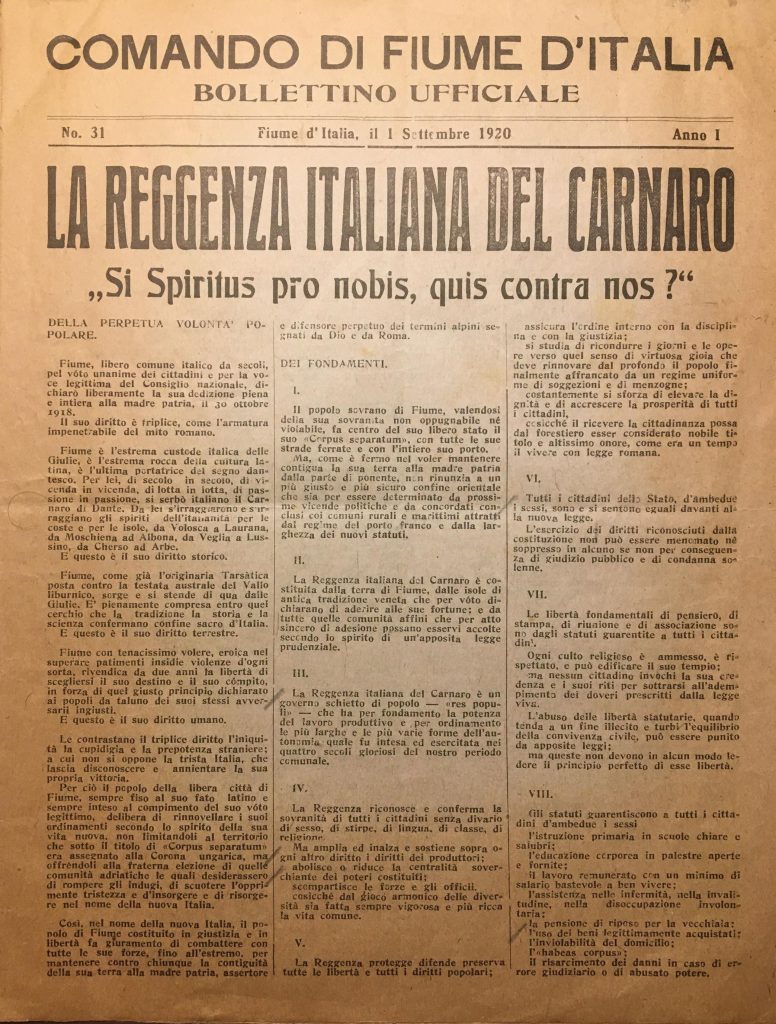 The Carta del Carnaro was printed and published on September 1, 1920.  The complete first edition can be viewed in its entirety in the Rare Book and Special Collections Division.

Addressing Fiume’s inhabitants on September 8, 1920, d’Annunzio proclaimed the birth of the Reggenza Italiana del Carnaro (Italian Regency of Carnaro) with himself as Comandante.  His most enduring legacy, however, lay not in the process of government, but in its regalia, using his own brand of ornamentalism to mobilize public support and lead his new state.  In the words of one historian, d’Annunzio succeeded in “creating a new style of political liturgy,” which embraced elaborate uniforms, ceremonies, emblems, chants and songs, and highly dramatic speeches delivered from the balcony of city hall. 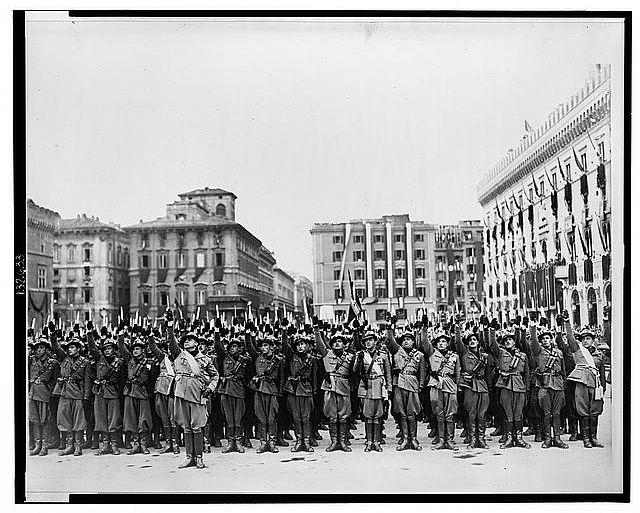 This photograph shows a large group of Italian fascist troops, all with right arm raised holding a dagger in salute to Adolf Hitler.  The gesture was one of d’Annunzio’s “inspired” creations.  Prints and Photographs Division.

All of the major cultural elements associated with Italian Fascism – the resurrected Roman salute of raising the right arm; Achilles’ Illiadic battle cry of “Eia, eia, eia! Alala!”; the black-shirted uniforms of the arditi, who were employed as enforcers; the dramatically-choreographed parades of well-armed milita; mass rallies attended by speeches and hymns — all of these appertained to his brief rule, with many adopted by his frenemy, Benito Mussolini, the other Il Duce. 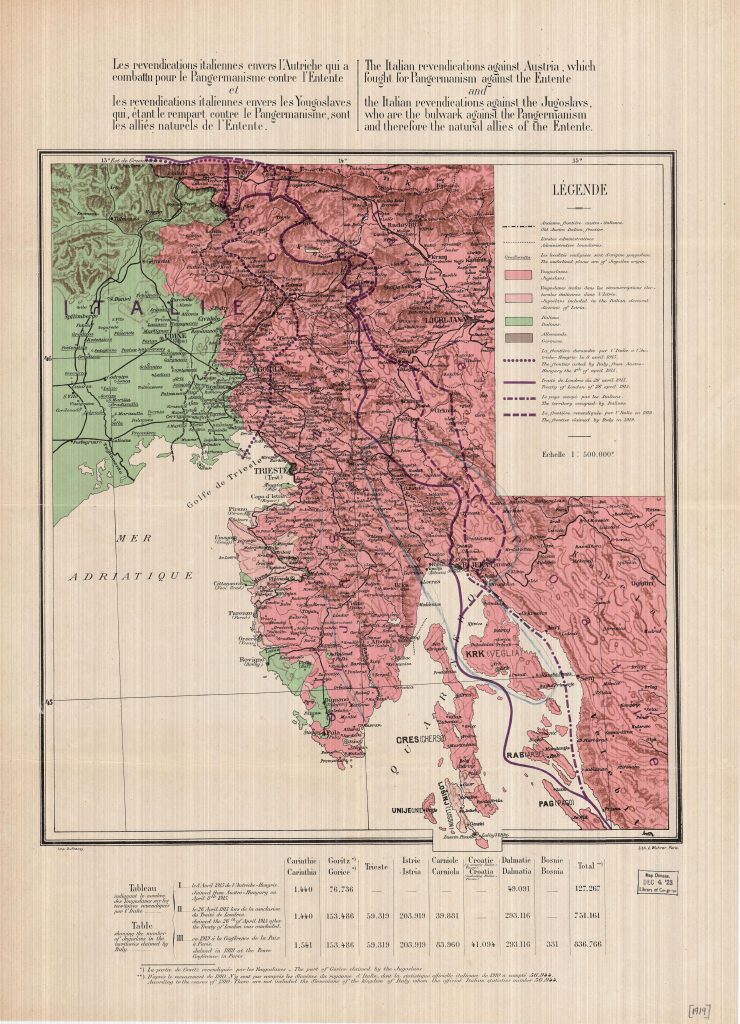 Fiume’s global stature may be small, but its regional legacy is substantial.  During and after World War I, its situation placed it among border disputes between Austria-Hungary, Italy, and Yugoslavia. Geography and Map Division.  Italy – Boundaries — 1919 – 1:500,000 — DuFrenoy

The Kingdom of Italy, however, had had enough of his shenanigans, and on November 12, 1920, by signing the Treaty of Rapallo with Yugoslavia, turned the Reggenza into the Free State of Fiume.  D’Annunzio declared war on his own country, only to be bombarded by the Italian Navy and driven out of the city with his followers by the Italian Army on December 30.  Finally, in 1924, the Free State of Fiume was annexed to Italy, in whose possession it remained until the end of the Second World War. 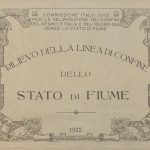 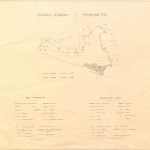 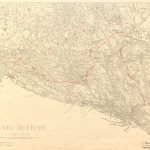 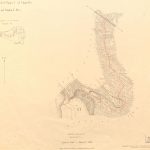 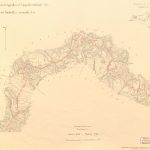 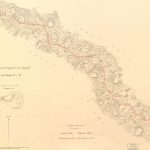 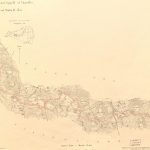 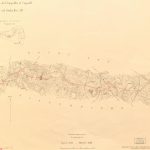 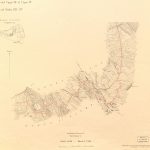 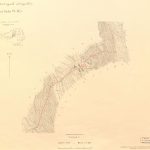 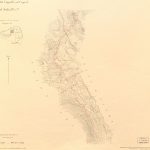 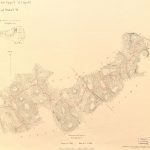 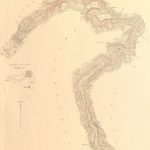 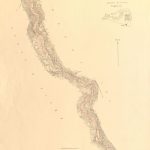 [In the wake of d’Annunzio’s ouster, the commission charged with delimiting Fiume’s borders between the kingdoms of Italy and Yugoslavia prepared this set of large-scale maps in 1922.  Geography and Map Division.  LC call number G6841.F2 s2 .C6 MLC]

D’Annunzio, marginalized by Mussolini, withdrew from public life.  An unexpected defenestration just before the March on Rome in 1922 led to suspicions of foul play.  Until his death in 1938 he continued to bicker with Mussolini over the alliance with Hitler.  He nevertheless was given a state funeral and buried in an imposing hill-side estate overlooking Lake Garda, which has become a shrine for Italians on holiday.

Today, Rijeka serves as Croatia’s principal port, and its environment is more sedate.  Every year the Rijeka Carnival attracts thousands of celebrants.  People attend opera, ballet, and theater at the city’s beautiful, Second Empire style Croatian National Theater Ivan pl. Zajc., and admire its early canvases by the brothers Klimt.  The European Union has even selected Rijeka as a “European Capital of Culture” for 2020.  But during those fifteen months of fascist turbulence exactly one century ago, it was a destination for none but the most demagogue-loving tourist.

The author is indebted to Bruce Kirby for his assistance in providing images for this blog.

N’Golo Kante: Chelsea will allow midfielder to stay away from training amid coronavirus fears