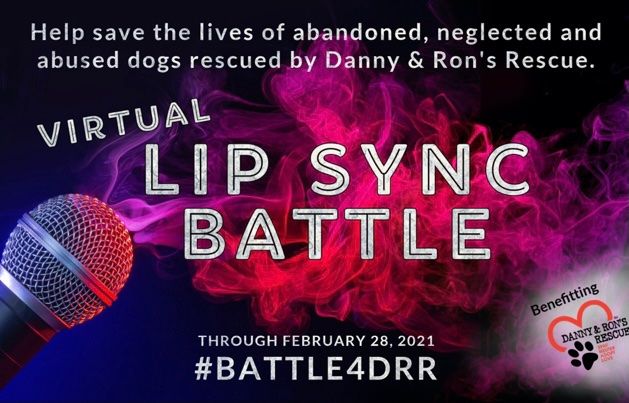 WELLINGTON, Fla. – Feb. 19, 2021 – — For twelve consecutive years, a lip sync battle benefitting Danny & Ron’s Rescue has welcomed teams of all ages to participate with their annual fundraiser. This year, due to Covid-19 and to ensure the safety of all involved, organizers realized they had to get creative or risk losing the momentum in their fundraising efforts to change the lives of abandoned, neglected and abused dogs rescued by Danny & Ron’s Rescue. Conceptualized in 2008 by Kim Koloff, the 2021 edition of the Lip Sync Battle has moved away from a traditional venue with sell-out crowds and is being held virtually. Acts and participant of the #Battle4DRR can be viewed online through February 28 with teams raising funds via virtual donations and pledges.Some of the most steadfast supporters since the inception of the Lip Sync is a team known as The Backstage Girls. Together, this group of equestrian professionals consisting of Cara Cheska, Leslie Pack, Stacy Arani, and Anne Caroline Valtin have choreographed kids, fundraised, offered backstage support and have created performances that have had everyone on their feet. To date, the team has raised nearly $30,000 with donations rolling in from the equestrian community, friends and family, the Wellington, Florida community and beyond. Says Cheska, “I have been participating in the Danny & Ron’s Lip Sync since the very beginning and we are thrilled to keep the tradition going by having a virtual rendition this year. We have all had to make some adjustments and pivot due to Covid, but the support has been tremendous, and we are so glad to keep the momentum going to continue supporting Dany and Ron in their mission to save dogs.”To donate to this year’s Danny & Ron’s Annual Lip Sync and to the Backstage Girls team, please visit their page at: https://p2p.onecause.com/battle4ddr/team/backstage-girls.About Danny & Ron’s Dog Rescue:Since its early beginnings in 2005, the rescue has saved over 12,300 dogs. All donations have a direct impact on their ability to keep rescuing puppy mill dogs, bait dogs used in dog fighting, and hundreds of dogs from shelters—often moments away from euthanasia. In direct response to the devastating effects of COVID-19, they have recently stepped up their support efforts of those most vulnerable, by supplying and delivering pet food to the elderly living in poverty as well as those who depend on local food banks to meet their family’s needs.The documentary, “Life In The Doghouse” tells the inspiring story of Danny Robertshaw and Ron Danta and the remarkable stories surrounding the work they do at Danny & Ron’s Rescue. Since 2005, when they rescued 600 dogs in the aftermath of Hurricane Katrina, Danny & Ron have saved more than 12,000 abused, abandoned and starving dogs. It is available on Amazon Prime Video, Itunes and Google Play. For more information on Danny & Ron’s Dog Rescue, and to learn more about ways to support the organization, please visit the website at: https://dannyronsrescue.org.

At pivotal point in their season, Flames are fired up for Oilers

Roundtable: Who will win the NL Central?