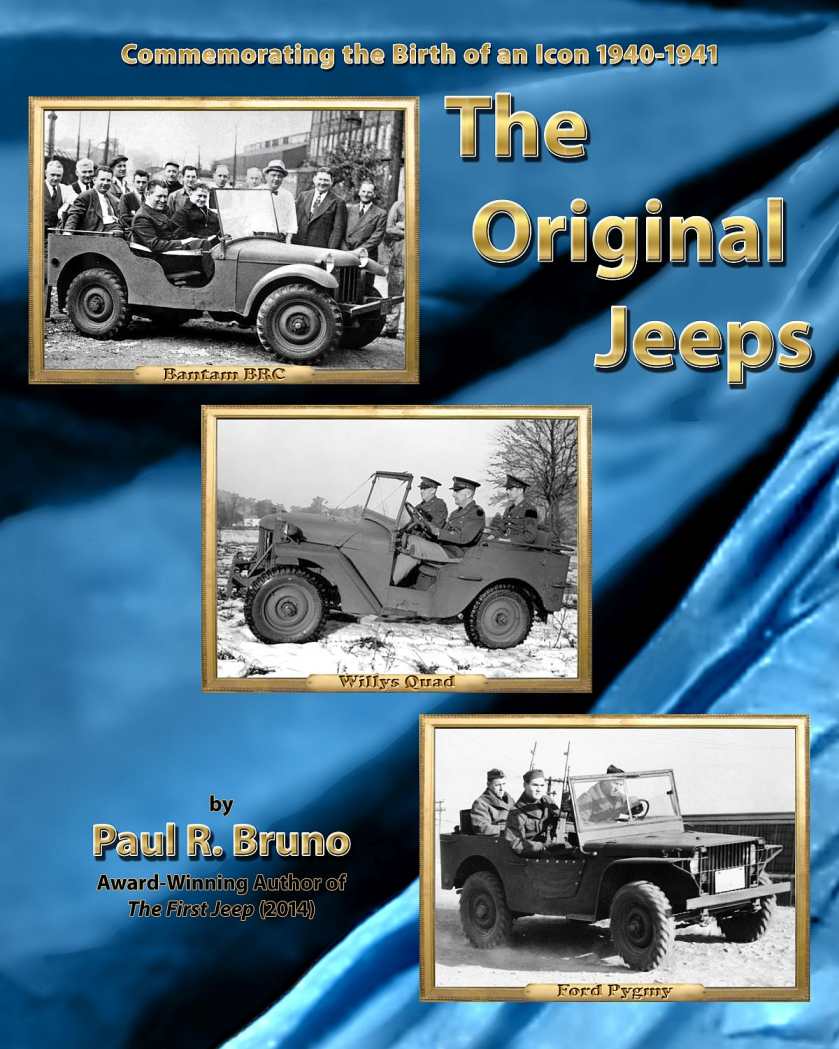 LAS VEGAS – June 8, 2021 – — The Original Jeeps, the true story of how three companies competed and ramped up manufacturing in 1941 to develop America’s first all-terrain, ¼-ton 4×4 vehicle, the Jeep, helping the allies emerge victorious in World War II, is now available at Amazon.com.The book from MFM Publishing has been released to commemorate with the celebratory 80th anniversary of the Jeep vehicle in 2021.Written by Paul R. Bruno, award-winning author of The First Jeep (2014) in combination with Publisher-Chief Editor Manuel ‘Max’ Freedman and Editor Steven K. Hoese, The Original Jeeps highlights the true story of the challenges, emotions, strategy and competition to design and manufacture America’s first ¼-ton 4×4, all-terrain vehicle.The Original Jeeps focuses on the history of the three competing companies, American Bantam Car Company, Willys-Overland Motors and Ford Motor Company, all in pursuit of the sole-source government contract to build the Jeep. It details the military’s plan to replace the mule as a key transport for troops and weaponry across rough terrain, and deals with and expansively quotes the key business, government and military officials involved in the design and decision-making.Similar to Bruno’s The First Jeep, The Original Jeeps is intensively researched and is full of photos, renderings, direct quotes, timelines and more. It is a highly informative read for any historian, automotive buff, Jeep fan, or World War II enthusiast.”The 1940-41 era was a bleak time in American history. The country was still in the midst of a recession within the Great Depression. Resources were limited. The German Army rolled out their powerful Blitzkrieg quick-strike capability and had begun to take over Europe,” Bruno said.”The American military knew war was coming, millions of lives would be at stake, and the future of democracy was hanging in the balance. In order to fight on equal ground the Army realized they had to develop a vehicle for mobile warfare.”Bruno adds, “What is truly amazing is that three firms produced prototype models, each overcoming unique challenges and circumstances to do so. Anyone who knows anything about manufacturing realizes it took a real production miracle to get that done on very short notice.””General George C. Marshall called the Jeep ‘America’s greatest contribution to modern warfare.’ President and General Dwight Eisenhower said the Jeep was a key tool that helped win the war. We wanted to salute that accomplishment and highlight the Jeep brand, an American icon that has survived for eight decades and continues to thrive today.”For more information visit https://originaljeeps.com.About Paul R. BrunoPaul Bruno is a highly knowledgeable expert on the earliest history of the origins, design, development and implementation of the iconic Jeep vehicle. He has spent more than 20 years researching, writing and studying early Jeep history. He visited key sites in this story, including the United States National Archives, and combined his knowledge of project management and history in his first book, Project Management in History: The First Jeep, published in 2014. The Original Jeeps further tells the story of early Jeep history and continues his journey into the depths of this important inspirational work of human ingenuity.

Joe Bonamassa To Perform at Youngstown’s Covelli Centre in November

Say It With Steelhead Trout