This post is part of the series Excavating Archaeology, which features selections from, and research on, the Jay I. Kislak Collection of the Archaeology & History of the Early Americas and related collections, housed in the Geography and Map Division and in the Rare Book & Special Collections Division of the Library of Congress.

Nature and abstract forms are both materials for art, and the choice of one or the other flows from historically changing interests.                       –Meyer Schapiro, Theory and Philosophy of Art

The provenance of ancient works of art is often a fascinating story of collecting, connoisseurship, and cultural tastes that is very different from the kinds of narratives traditionally found in academic archaeological, art historical, and anthropological writing. Provenance, broadly defined, is the history and life cycle of an artifact and is comprised of critical facts about when and under what circumstances the object came out the ground (excavated, looted, or happened upon), supplemented by a list of the collections it has found itself a part of. For archaeologists and ancient historians, some of this information forms the foundation for how they understand an artifacts place in the cultural and temporal matrix of the people who created it, for others it is a kind of detective story and a portrait of the aesthetic and economic forces that drive the art and antiquities market.

In the Jay I. Kislak Collection there is one piece whose provenance, and that of others like it, exemplifies the vagaries of collecting and the fascination that curators, collectors, artists, and writers have with certain works of art. In this case, the object we are exemplifying is a feather panel that dates from between 700-900 CE, whose beauty will stop you in your tracks.

Blue and Yellow Macaw Panel from the Wari Culture of Southern Peru. Jay I. Kislak Collection, Library of Congress.

The panel was purchased by Jay I. Kislak at an auction at Sotheby’s and came from the art collection of the actor and film director, John Huston (1906-1987). The feathers making up the simple abstract design, are sewn onto plain cotton cloth with camelid fibers of alpaca or llama making up the outer edges. The size of the panel is large, measuring more the 85 inches in length.

The Kislak / Huston panel is just one of the ninety-six examples recovered in 1943, created by the Wari culture, and found in a place called the Corral Redondo, near the village of La Victoria in the Churunga Valley on the far southern coast of Peru. The vivid colors, which so caught the attention of Huston, are generated by the brilliant iridescence of the feathers of Ara Araruana, a member of the Macaw family. 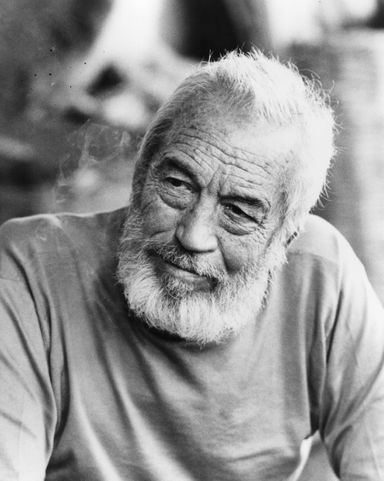 John Huston in 1981. Courtesy of the Cannes Film Festival Archives.

Many of the ninety-six panels, buried in antiquity in large ceramic jars, have made their way to museums, like the Metropolitan Museum of Art in New York and Dumbarton Oaks in Washington, DC. For many years however a surprising number of the panels remained in private collections.

Huston, who directed such classic films as the Maltese Falcon and the African Queen, was also an accomplished painter, and wrote in this autobiography, Open Book that “Nothing has played a more important role in my life.” He collected the art that inspired him to paint, and his collection ranged across a broad spectrum from the works of Paul Klee to a small collection of Pre-Columbian art that included the feather panel now in the Library of Congress.

He was not however, the only artist, film director, or author to be entranced and inspired by the stunning blue and yellow of these ancient panels. Perhaps the two most famous artists to own one were the surrealists Max Ernst and Dorothea Tanning. Ernst, at the time he met Tanning in 1942, was married to the collector and patron of modern art, Peggy Guggenheim. Tanning and Ernst lived in New York for several years before moving to Sedona, Arizona, and then later back to France. The panel they owned is one of the many examples found in the collections of the Metropolitan Museum of Art. 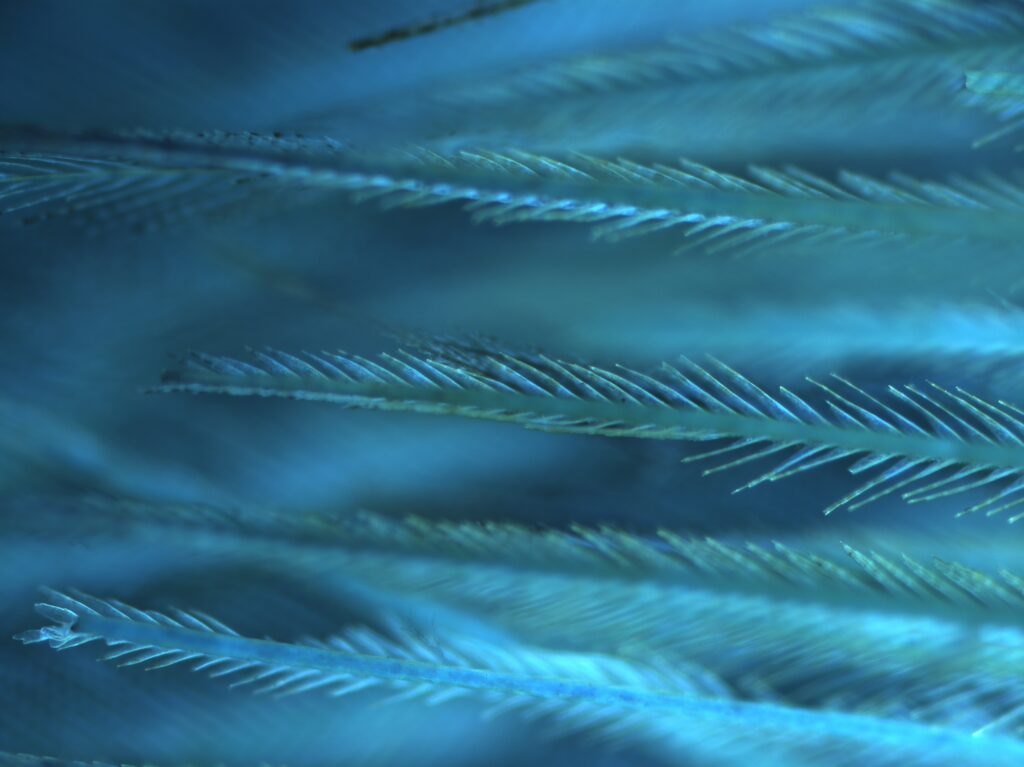 Photograph in UV light that brings out the complex structure and iridescence of the Macaw feathers that make up the large Wari feather panels. Photograph by Preservation Research Division, Library of Congress.

The most lengthy narrative by a writer who owned one of the panels comes from the pen of Bruce Chatwin (1940-1989), whose In Patagonia and Songlines transformed the genre of travel writing in the 1970s. Before becoming a writer and world traveler, Chatwin worked in the antiquities department at the auction house Sotheby’s and through the years, became a trusted expert in discerning forgeries. In an essay called a “Place to Hang Your Hat,” published in Anatomy of Restlessness, Chatwin talks about selling off much of his art collection but pauses to reflect about his love of the feather panel. His story is a perfect snapshot of what the American antiquities trade was like in the 1960s.

Bruce Chatwin in his apartment with the Wari Feather panel above his writing desk. Image Courtesy of the Bruce Chatwin Archive, Oxford University.

I still have, for example, a hanging of blue and yellow parrot feathers, probably made for the back wall of a Peruvian Sun Temple and supposed to date from the fifth century CE.

He  goes on to explain its provenance and  how it was that he came to have it as part of his art collection,

In 1966, I saw a similar piece in the Dumbarton Oaks collection and, on returning to New York, went to see my friend John Wise, who dealt in Pre-Columbian art in a room in the Westbury Hotel. John Wise was a man of enormous presence and a finely developed sense of the ridiculous.

‘I would give anything for one of those, I said’.

‘Would you? he growled’.

‘How much money do you have in your pockets?’

I handed him about $250–and he handed me back $10 with an equally grumpy “I suppose you eat lunch.” He then called on his assistant to unroll the textile on the floor.

‘Lucky sod!’ he called out.

Masterpieces of ancient art like the Wari feather panel in the Kislak collection have many lives. The first of course was lived out where it was created by a series of craft persons, some who raised and collected the Macaw feathers, some who wove the cotton and alpaca, and finally, those who painstakingly sewed each feather in perfectly formed colorful rows. Unfortunately, scholars today have yet to really understand the purpose of the panels and their importance to the culture that produced them.

Whatever their purpose however, they have captivated onlookers, archaeologists, curators, artists, and writers, from ancient times to today. Their incredible state of preservation making us all ‘Lucky Sods,’ who still, after more than a thousand years, get to appreciate the natural beauty of their simplicity, the perfection of their color and design, and the remarkable stories of how they came to be in the museums and libraries where we experience them.

Over 5 million Americans could soon be eligible for Covid vaccine booster shots.